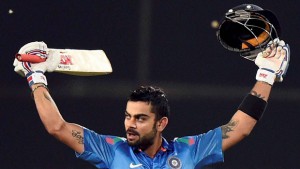 November 16: Indian skipper Virat Kohli trumped another equally superb maiden, made unbeaten 139 out of 126 runs. India completed a 5-0 series victory at the JSCA Stadium, Ranchi on Sunday. India won by three wickets with eight balls to spare. Kohli struck 12 fours and 3 sixes during his 126-ball captain’s knock as India boosted their confidence ahead of the tough upcoming tour of Australia. Kohli, during his knock tried replicate MS Dhoni’s trademark ‘Helicopter shot’ in the 49th over bowled by Ajantha Mendis.

On a day of captains, Sri Lanka skipper Angelo Mathews hammered a brilliant 139 not out to guide the visitors to a challenging total of 286/8  in 50 overs after electing to bat.

Kohli roared at the game’s conclusion, plucked a stump from the pitch and soaked in the applause from a delighted Ranchi crowd.